Deer are quite common and, in Germany and Bavaria, are usually shot by hunters. Roe deer are in season from mid-May to January. Why not give it a try? Regional game meat is a natural product with short transport routes.

Firstly cut the shoulders of venison into several pieces.

Season the pieces of venison with salt and pepper and sprinkle with game seasoning.

Heat the oil in a pan and fry the meat on all sides until it turns golden brown.
Now gradually add the vegetables – the garlic cloves, chopped onion, celeriac and carrots – and allow it to stew together.

Once the venison and vegetables have turned really golden brown, add a tablespoon of tomato purée to the pan and cook.

After repeating the reducing of the juices, add the veal stock and then season well with sea salt and pepper.

Now it’s time to add the herbs – the sprig of thyme, rosemary and some parsley. Then add the 2 tablespoons of grated potatoes to thicken the mixture. Next place the pan covered with baking paper in the oven and allow to stew at 160 degrees until the meat is tender. This takes around one hour and a half to two hours.

To make the quark spätzle (type of South German pasta), either allow the quark to drain well over night or firmly press it now. Then add the other ingredients – the flour, eggs, egg yolk and also the salt and nutmeg – and mix it together well. Next press the mixture through a spätzle sieve into boiling salt water and bring to the boil. Now rinse the spätzle in cold water.

The next step is to sauté the sweetheart cabbage which has been blanched in some maize germ oil with the diced shallots. Then season with salt, pepper and nutmeg.

Serve the sauce and meat on a plate with the sweetheart cabbage and quark spätzle.

A commentary by Ms. Veronika Flöter, Nutrition Consultant at the Munich Tumour Centre:

This dish is relatively low in energy and forms a substantial meal due to the particularly large portions. It contains high quantities of many micronutrients. For example, it is especially rich in vitamin A, B2, B6, B12, E and K, and also in niacin, biotin and zinc. It also contains folic acid, pantothenic acid, potassium, phosphorous, iron and copper.

Zinc is involved in many processes in the body, for example it is important in wound healing, for the immune system, the skin and a sense of taste. When suffering from cancer the zinc metabolism can change and the excretion of zinc can increase. This doesn’t mean that there is automatically too little available to the body, however, in order to avoid over-dosage it is important not to take a dietary supplement unless a deficiency has been identified, and this should then also be discussed with a doctor.

The intake of zinc through a balanced diet is safe and important. Nuts, wholegrains (e.g. oats, wheat germ), red meat and hard cheeses are all examples of good sources of zinc. 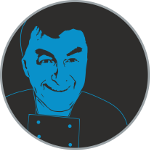 Hans Haas has been awarded a variety of honours and prizes for his culinary skills. He is one of the best chefs in Europe and has successfully run the "birthplace of German nouvelle cuisine" - restaurant Tantris in Munich since 1991.
More posts by the Author »